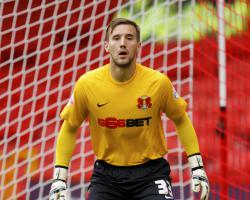 Accies failed to lay a glove on the Gorgie side during a one-sided contest and the winning margin would have been bigger had it not been for Woods pulling off a series of saves.

Hamilton manager Martin Canning described the defeat as their worst of the season and the fruitless trip to Edinburgh has left the SuperSeal stadium club just one point clear of Inverness at the basement of the Ladbrokes Premiership.

Hamilton arrived at Tynecastle with hopes of taking something from a game against a side that had not won any of their previous five matches but former England youth cap Woods insists they let themselves down.

He said: "I don't think that performance is good enough

We are down near the bottom, Hearts haven't playing particularly well and we lose 4-0.

'We know they are still a good side but we knew they were low on confidence but because they made so many chances the crowd got behind them.

"'It was a tough afternoon

Hearts started fantastic and bombarded with shots and penned us in.

"It was a very busy first half and then we conceded two poor goals within a couple of minutes and that killed the game.

"We need to pick ourselves up now, we have a tough game away to Rangers.

"We know that sometimes our performances haven't been good enough."

Woods denied Hearts on seven occasions with fine saves in the opening 45 minutes before Arnaud Djoum finally broke the deadline in first half injury time.

Esmael Goncalves then scored from Don Cowie's lay-off in the 56th minute after Woods was penalised for picking up a pass back.

Jamie Walker notched a stunning free kick two minutes later before substitute Malaury Martin caught Woods out at his near post with a set-play in the 89th minute.

Woods admits he picked the ball up from the pass back after believing that referee Craig Thomson had blown for a foul on Walker.

He said: "I thought I heard the referee blow his whistle.

He has passed it back to me and everyone stopped.

"I picked it up and I don't think the referee was going to give it until the players got around him.

"Those situations rarely happen in the game do they? We lost that and then another straight after and it was like a double whammy."

Hearts head coach Ian Cathro was delighted with his side character after they picked up their first win in six matches to remain in fourth place.

He said: "We spoke before the game and one of things I said is that when you've had a tough period and you've under-performed, it's important you focus day to day.

"We've had other games that we've also been dominant, played well and had a lot of attacks.

"Some parts of the games have gone against us and those games have been negative results, like Ross County, Inverness.

"On Saturday, maybe we were a little bit better, a little bit stronger, a bit quicker - but not a massive difference

We know there's been gradual progress."