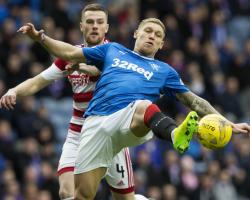 The 23-year-old defender was substituted in the first half of Saturday's 4-0 Ladbrokes Premiership win over Dundee at the SuperSeal stadium.

Devlin will miss the Ladbrokes Premiership play-off with Dundee United, with the first leg at Tannadice on Thursday night and the return game at Hamilton on Sunday.

The Accies statement said: "Michael underwent a scan at hospital yesterday (Monday), and has had the results and subsequent discussions with our medical department and his own family late this afternoon.

"With Michael's permission we can now confirm that he has unfortunately suffered a tear in his ACL (anterior cruciate ligament).

"He will now deal with our medics on the proposed operation or rehab as appropriate, and all of us at Accies wish him a full recovery."

Earlier in the day, Hamilton boss Martin Canning was preparing for the absence of his captain.

He said: "He was out for Sunday, he was suspended and was going to miss it regardless.

"It is a blow because he has been great for us all season.''

Canning explained the news could be offset by the return from injury of Greek defender Georgios Sarris.

The Hamilton boss added: "Hopefully we can get Georgios Sarris back for Thursday so it will be like-for-like."

Canning is heartened to go into the first game on the back of a convincing home win over the Dark Blues.

However, he acknowledged that Dundee were already safe before they travelled down from Tayside.

He said: ''I don't think Dundee played the way they would have if the game meant as much to them, in terms of they couldn't go down.

''We have to be careful not to fall into the trap of 'we have beat Dundee comfortably, the game has gone great'.

''It isn't going to be the same on Thursday

It can be if we go and play as well as we have but we need to make sure we win the battles first.

''The pressure on both teams is equal, we need to make sure it means more to us than it does to them, give it everything over two games and hopefully get the job done.''